“The mentally ill have always been with us, but for no family is this truer than for the Eustace Family. For five generations, for nearly two hundred years, they have cared for the mentally ill, have lived with them, have accepted them as part of their normal daily lives. While the treatment and care of mental illness is, in our day, accepted as one of the duties of a caring society, we must remember, that when John Eustace opened the doors of Hampstead Hospital in 1825, old attitudes were only beginning to change. The mentally ill were still outcasts, still ‘lunatics’, the majority of them being treated with coercion and restraint. The State’s policy of providing asylums was only developing and it would be a long time before these became caring and therapeutic institutions.

John Eustace was, however, a Quaker, and was influenced greatly by the Quaker philosophy of ‘Moral Treatment’ compassion rather than punishment – expounded by William Tuke in The York Retreat. Tuke’s basic belief that the care of the disturbed patient should be holistic rather than purely medical, has been central to the development of the Eustace Family’s approach to the mentally ill. In this context, holistic extended to include sympathetic surroundings with space to work, space to walk, space to relax. Hence the beautiful lands of the Eustace Estate formed, from the start, an integral part of the treatment; and because the Eustaces always lived on the Estate, indeed, for a long time in the same houses as the patients, the history of the Eustace family is inseparable from a history of the development of the Eustace Hospital Group itself.”

To read the full Eustace family history, please click on the document below. 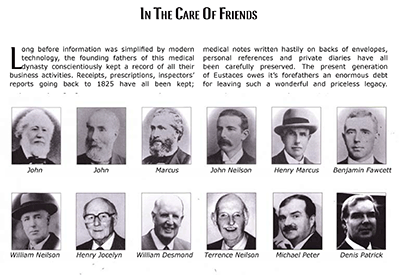 This website uses cookies to improve your experience while you navigate through the website. Out of these, the cookies that are categorized as necessary are stored on your browser as they are essential for the working of basic functionalities of the website. We also use third-party cookies that help us analyze and understand how you use this website. These cookies will be stored in your browser only with your consent. You also have the option to opt-out of these cookies. But opting out of some of these cookies may affect your browsing experience.
Necessary Always Enabled

Performance cookies are used to understand and analyze the key performance indexes of the website which helps in delivering a better user experience for the visitors.

Analytical cookies are used to understand how visitors interact with the website. These cookies help provide information on metrics the number of visitors, bounce rate, traffic source, etc.

Advertisement cookies are used to provide visitors with relevant ads and marketing campaigns. These cookies track visitors across websites and collect information to provide customized ads.

Other uncategorized cookies are those that are being analyzed and have not been classified into a category as yet.

SAVE & ACCEPT
Powered by

Please continue to  follow hand hygiene and wearing of  masks while on our premises.

At Highfield Healthcare, the health, safety and wellbeing of our residents, patients, staff, volunteers and visitors is of paramount importance to us.

We are regularly updating our plans for all services and will keep families updated with any details regarding visiting your loved ones.